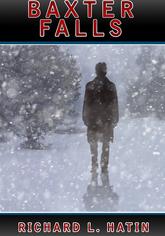 The small and desperately dying community of Baxter Falls, New Hampshire is situated on a very isolated stretch of State Route 3. It is located halfway between the Towns of Stratford and North Stratford, on the western side of the State, in the North Country region of NH.

Back in the 1920’s, it was a thriving small community deeply steeped in the logging industry with a population topping out at 2,106. Today, its population has dwindled down to 47.

Now, Baxter Falls finds itself in the grip of a record setting blizzard. The paralyzing storm arrives on the same weekend as the closing of the last business in Town, Betty’s Diner. A high adventure hiker, a stranger, arrives at the beginning of the storm. This mysterious stranger has chosen Baxter Falls for a very special reason. He has come here, under cover of the blizzard, to ensure the dying community’s destiny is fulfilled!

Will anyone in Baxter Falls survive?